The day was here. The day Skid had been prepping for all month. Weenie dunk time. Skid studied the dogs in the first rounds. 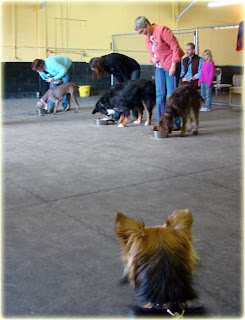 Then it was his turn. They put four weenies in the bowl. We'd only been practicing one at a time. It would be a challenge. He took a deep breath and plunged his nose deep into the bowl to grab one, two, three, up for a breath and a mad dip back in to eat the fourth one. DONE! 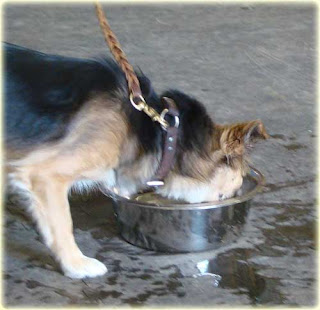 He raised his head and found that he had won his heat.
Now he had to move on to the next level against Wicca the corgi. The winner would race Jane the Jack Russel, the undisputed champion. It was close but he just couldn't beat Wicca. She went on to the finals against Jane and won! Just to make sure Jane knew she was beat, Wicca proudly displayed her crown. 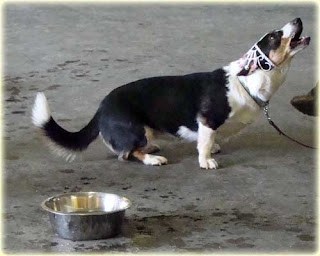 We had no hope of winning the next game: Musical Mats. The objective is to walk around the mats until the music stops and then the dogs must sit on them. Whoever doesn't get a mat is out or if there is a dog not sitting on their mat, you can steal it. Skid knows how to sit, but chooses not to -but then someone said the magic words, "hot dogs". Yes. We could use bait. OK, now we were back in the game. We started with four dogs and three mats. The music stopped and quick, Skid was on his mat and sitting, waiting for his treat. Then down to three dogs and two mats. Skid continued his record sitting and we were on to the last round. 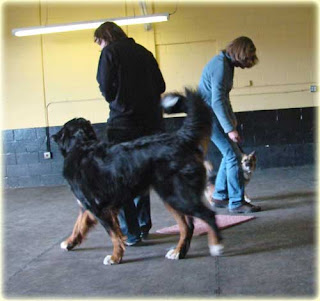 Round and round we went and then the music stopped. Hurry, hurry and he was on his mat and sitting. The Bernese Mountain dog we were competing against sat too, but not fast enough and SKID WAS THE CHAMPION! 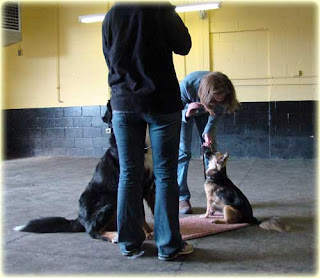 Yea! Ironically, he won a plastic squeeky hot dog. A fitting prize for a dog who worked so hard just to eat a little piece of a hot dog.
Our last competition we came in fifth. Barrel racing around chairs. We ran as fast as we could but it was easily won by a beautiful loping Flat coat retriever. Oh, well, can't win them all. 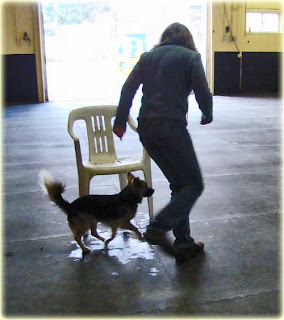 Skid and I had a blast on our day away from the farm. I must say thank you for the invite to Paws On the Run-dog daycare, the Go Dog Go Agility group and of course to Sara and Amanda who organized it all.
Posted by Jenny Glen at 5:37 PM