Yeah, I know. This looks like a hunk of junk sitting in the middle of our barnyard. 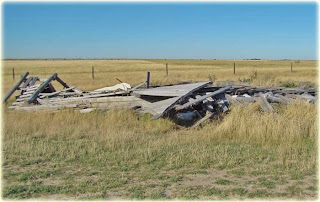 It used to be a nice storage building but the guy who lived here before us took the roof off of it to make it a greenhouse for pot. (seriously) A big wind came through 3 years ago and with no roof, it fell in on itself. Scott declared that he was going to burn it this winter and then changed his mind. You might think it was laziness but it actually has a function right now.
Since Kit has declared war on the cats they are using the fallen down barn for a safe haven. While we try to figure out what to do about the situation (we need the cats for mousing in the barn and a dog to guard the sheep) we have decided to let Cali and Ghost's new litter stay feral. 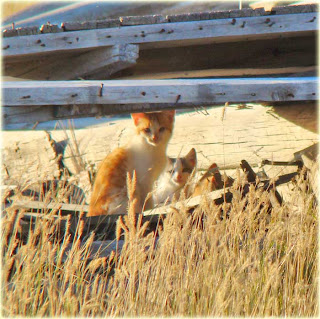 They will be able to evade Kit and the owls if they don't stay out in the open, and the fallen down barn is their home base. Cali still comes to say Hi when she thinks it's safe out but we only catch glimpses of the kittens who have obviously learned like their father Ghost to disappear when spotted. 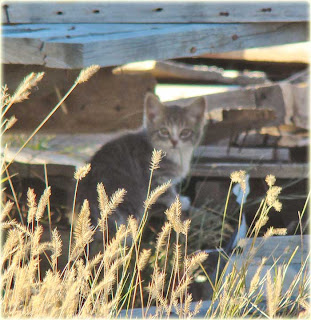