"The rumors of my death have been greatly exaggerated". Sorry folks! I haven't been posting because I've had no computer access for a week or so. I've been traveling. I went to a few trials (which I will slowly update over on my trial blog) and my parents came up from California to visit us. We traveled to Banff, sans dogs, (Scott stayed home and babysat) but don't think for one minute there were no animals on this trip. More about that later...
For right now, I present you with some time sensitive material. Otherwise known as Togo's growth spurt. 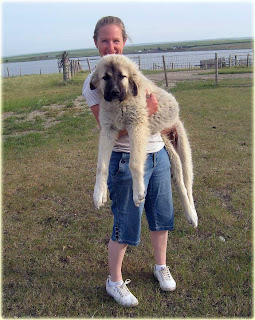 How many 17 week old pups have you met that are this big?
Alot of people are asking me how Kit is handling having him around. 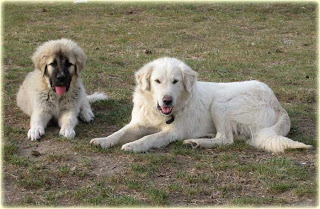 Oh, she doesn't mind him too much. 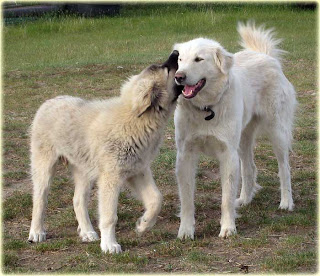 My mother and father just adored him and took lots of pictures. I once caught them discussing whether or not he would fit in their suitcase.
Rumor has it that Togo is starting to bark at the coyotes at night now. My parents were hoping he'd fail as a guardian dog and they could take him back to suburban Orange County, California. As they were leaving this morning to get on the plane to go home, my father whispered to Togo, "Don't bark anymore - Don't bark." 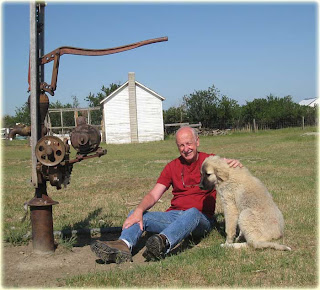 Wow has he grown!! Welcome back. I missed your blogs! Crue says hi.

I can't believe how long his legs are!!! Wow!

wow, that is one enormous pup!!

Togo is an illustration of the old Penna. Dutch saying 'You can carry a cow if you start with a calf'. =)