Around here, it's animals first, farm second. So it takes us a while to get around to maintenance that is often over due.
I'm sure you've seen pictures of our barn before. It's featured prominently on our website and it's often in the background of my pictures on the blogs. It's a grand old structure that is the centerpiece to our prairie farm. 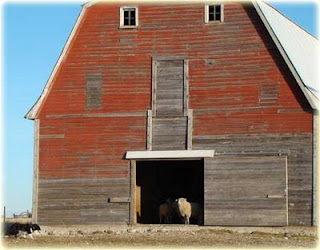 Rumor has it that it's over a hundred years old but the only date we've seen is the one carved in the first box stall that says 1958. Early graffiti or the construction date? We don't know. What we do know is that the barn has needed a face lift. Scott's brother put a new tin roof on it a couple of years ago and we decided it needed a paint job to go along with it.
This summer, Scott has taken on this task by himself. I can't say I didn't have a heart attack when I looked out the window and saw this, 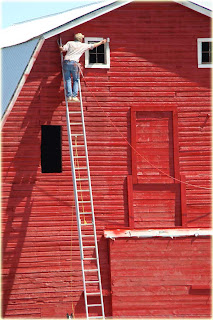 But he made it down in one piece and I have to say the barn looks pretty spiffy. 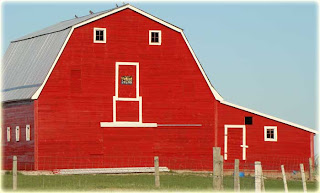 As a finishing touch, we added the sign that my best friend, Melissa bought for us years ago. The one we said we'd put up when we got the barn painted. (it's been a while) 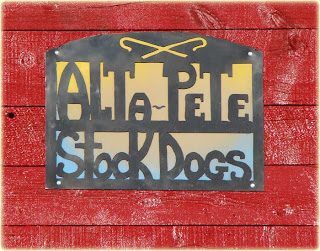 Yes, Scott, I think this finally makes up for the stone steps in the front yard. 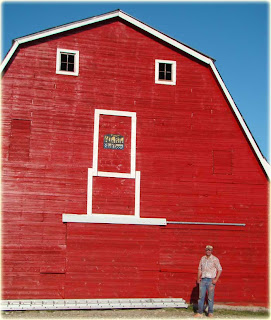 the barn looks great! Tell Scott he did a great job. And I will say when I looked at the pic I almost had a heart attack. I hate high places anyway, but that flimsy ladder that high?

Wow that looks awesome!!! How many cans of paint did you use?

We'll be able to see it for miles and miles!

Fantastic job! No fear of heights either, obviously!And I love the sign.

The barn looks fantastic. It is not a small barn and not a small project and as the picture shows, not a project for the faint of heart.

Staining a big deck and a bizillion white spindles as a project pales in comparison.

Your barn looks a bit perplexed, two more white boards and it would be a smiling!!!! vic