Since Kit has been gone, our barn cats have started to come out of the woodwork and relax a little. 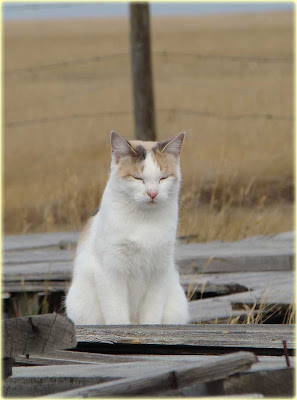 We are actually finding out that we have more cats than we realized. 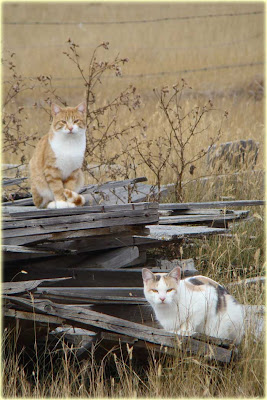 There are three different litters of kittens but only 5 kittens total. 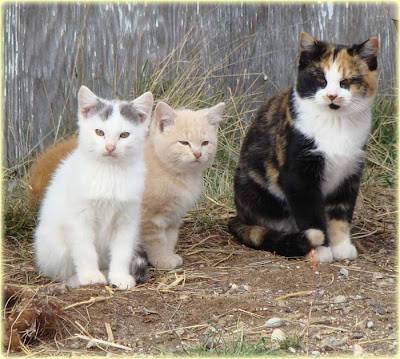 Cali is the matriarch of the cat population and all the kittens follow her around, even when they don't belong to her. She makes sure that all is well before they come out of their hiding places. 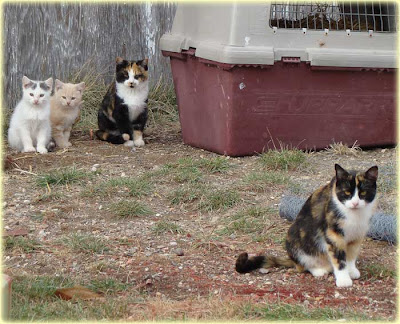 This kitten is my favorite. 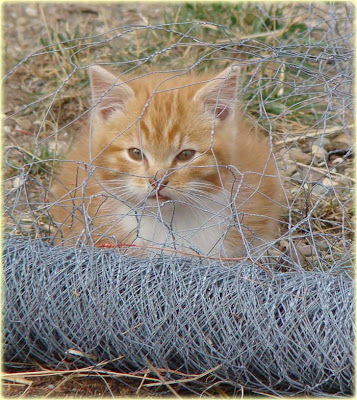 Kit killed almost all of his litter and he was mauled and had big gashes on his stomach and side. I don't know why he wasn't hurt worse but Togo found him in the barn huddled with his remaining sister. His sister was hiding her head, sure that the death blow was coming but even tho he was only 4 weeks old and weak and in shock from his wounds, he was bravely facing Togo who was barking at him. (kittens being so dangerous and all) Scott and I moved him and his sister out of the barn and into the shop where I could feed him and keep his wounds clean.
He recovered, and even tho Cali is not his mother he follows her everywhere. She and the other cats keep a wary eye out for predators while he plays in the sun. 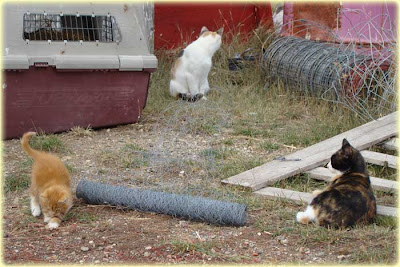 Oh - I want the calico kitten!

the white one with the grey on his head is super duper cute!

send me a kitty!!

I love kittens but sadly I have my own version of "Kit" here at home, so my little orange kittens both went home with my dad. I am sad I couldn't keep them but happy I can admire yours on the blog! Orange kittens are my favourite. Does he have a name yet?

No, no name yet. I'll let him get a little bigger before I name him. But of course I gave the little calico that is Cali's granddaughter the orginal name of Cali-Junior.

the calico with the black leg is CUTE!!!! all those kitty's are beautiful & I'm not even a cat person!

Hey Jenny: Cali the Calico Cat reminds me of Candy, who was our Calico cat (one heck of a mouser) who lived to be 20, back in my Ontario days. Your Cali is a knockout. Penny

Rigby, our barn cat, made himself at home in Scott's truck when he was here this morning but I snatched him before he went on the jaunt to Canada. He loves to go for rides in people's truck and so far, he went on two rides, both over 50 miles away......