Skid loves food. That's nothing new. Most dogs do.
I watch his food intake though so he doesn't get fat.
However, Scott can't resist those pleading eyes. 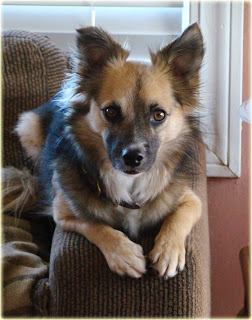 He watches Skid intake food too. Over and over again.
While I was in California last month, Skid took advantage of Scott by telling him that Mommy wouldn't mind if he ate extra and Scott believed him.
It's not as bad as it was but now Skid's waistline looks like this. 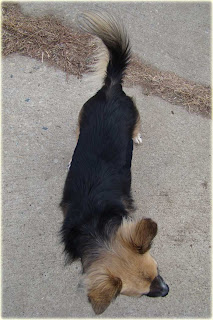 Does it remind you of anything?

Needless to say, a diet has been implemented. 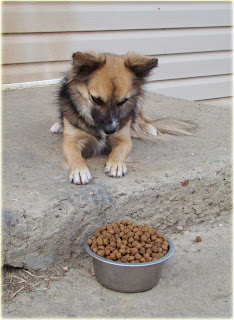 Hehe. So true... my girls are always a little chubby when I get home from a trip as well. Those boys are so gullible!

In Scott's defense, Skid's "pleading gaze" is quite compelling.

I have a nickname for jane when her waistline seems a little thick ie. she got fed by grammy

perhaps we should call you Sausage McSkid??

Does Rainey look like a sausage too? Scott said he fed her well. She is like her mama, looks at food and gains weight!!