A package arrived yesterday from my friend, Donna, over at the Spiritdance blog. I placed the the box under the tree to open at Christmas but when Skid started standing over it and guarding it from the other dogs I asked Donna if maybe there were things in it that I would have to hide from the dogs until Christmas. After telling me that Skid had a nose good enough for search and rescue, she had me open it.
There were gifts for everyone!
I got a beautiful decoration that suits my style perfectly 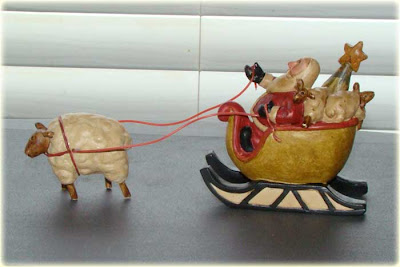 and a new barn ornament for the tree. 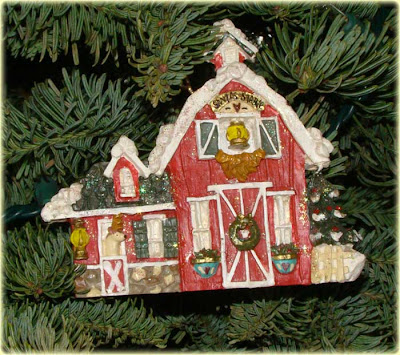 Scott found the shortbread and immediately started munching and Pleat and Maid had homemade treats sent over especially from Maid's daughter, Jet, and Pleat's son Ted, (they plan to share with everyone)

Poe and Salem got a toy with catnip - I'm not sure Poe on drugs is going to be a good thing. 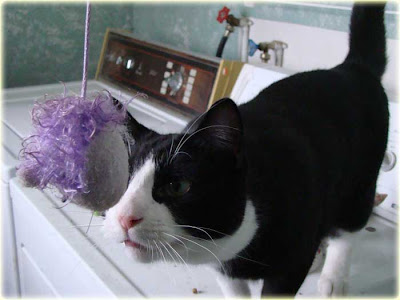 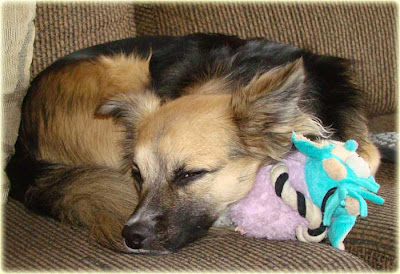 and to prevent it from being stolen, he's sleeping with it with one eye open.
Posted by Jenny Glen at 2:31 PM

isn't Donna a sweetheart!!!
I received some homemade cookies for Brad & I, & some homeade dog treats for Tate & Kort too!
LOVE the Santa sleigh with the sheep pulling it!

Jenny I am just blushing! Your post is too funny. Skid cracks me up with his little sheep toy. I put the recipe for the dog treats on my blog. They are very popular with my crew. Merry Christmas to Maid, Pleat and well, you and Scott too, LOL! Donna

OMG - are there sheep IN the sleigh too?!? Love the pic of Skid. Too funny.

Love your blogs! Makes me feel like I'm keeping in touch