No the title of this post does not refer to the Broadway musical.
It has to do with the beasts that, through no fault of their own, (ok, Poe is a little at fault) are the torture devices of my border collies.
I used to never have a problem with my dogs and cats.
Old Bob and the dogs that came before him, couldn't care less about the cats. 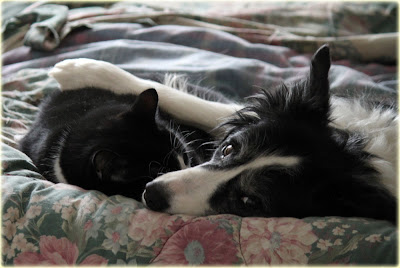 Bob would like me to clarify that he never chooses to snuggle with the cats but sometimes, when he wakes up from his old dog naps, Poe is just there.

Laddie was the first of my dogs to have an issue. 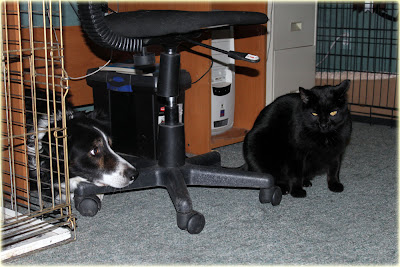 He obsessively lays down whenever there is a cat around.
I think it's the only way he knows how to control his urge.
The urge to just have a little taste.

Then there is Hemp. 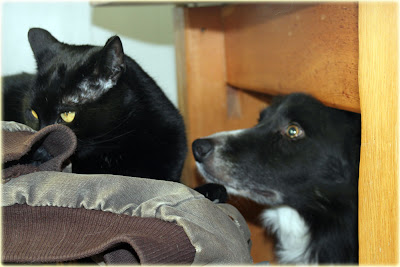 Really, there are no words to describe his obsession.
He needs therapy.

Now Ford is starting to show he'd like to join in the family business. 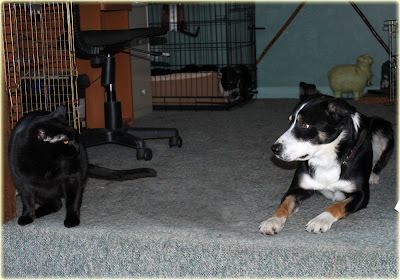 So far the cats still have him under control but he spends alot of time talking about it when he's in his crate.

And then there is Try.
He doesn't care about the cats he just wants sheep. 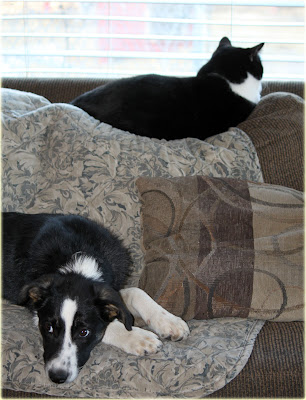 Miad used to stare at Sarah, our cat, until one day she decided to teach her a lesson(Chased her about)....and now she ignores the cats and Sarah and Maid sleep together now....Maid could care less about the cats now.....unless it is the neighbor's cat.....then she stares at it and it runs off!

Love that first shot. I think you make a greeting card out of that one.

awww.... the goggies just want to know if the kittehs taste like chicken.