We've recently been visited by a new cat. I have no idea where he would have come from since the nearest occupied house is several miles away. We just catch glimpses of him. Well, us humans catch only glimpses. Salem has run into him a few times on his outside patrols and ends up getting his face rubbed in the dirt. We were hoping he'd settle in and claim the area outside our front yard for himself and then Salem can have the area around the house and of course the inside of the house if he can find a place unoccupied by Poe.
Last week, Skid helped the new cat understand the boundaries and so far the lesson seems to have stuck, which is good because we don't want to have to relocate him because he is bullying Salem.
I was only able to catch one picture of him. 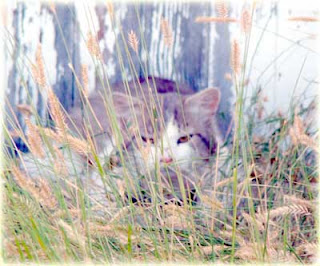 Scott has already given him a name.
Ghost.
Posted by Jenny Glen at 7:30 PM